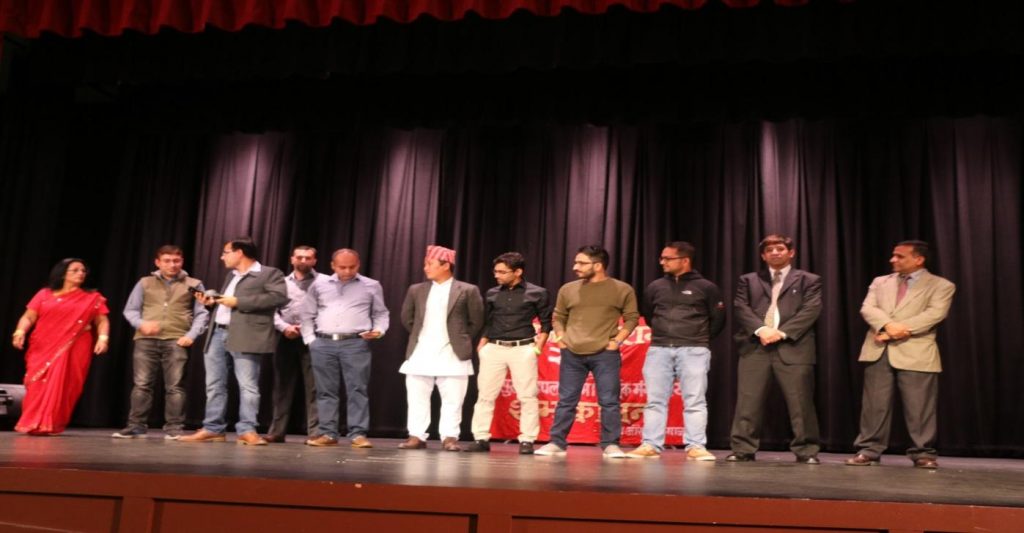 NAO outgoing President Ganga Sharma thanked her executive committee members, NAO advisors, NAO committee members and other community members for their outstanding support to make her tenure remarkable. Ms. Sharma wished success to new NAO president Bharat Banskota and his team and expressed her commitment to help new committee as in the past.

NAO celebrated this year Dashian party a little differently compared to previous years. Instead of organizing the stage dance, NAO invited local organization Portland Kirtan and ask them to sing Ganesh Bhajan, Durga Bhajan and Kali Bhajan. The singer from Portland Kirtan sang those Kirtans. We were amazed when the local group started to sing Nepali bhajan kirtans with harmonium, tabala, sitar and jhyali. This gave our community members nostalgia of Nepal and particularly the temples of Nepal.

Also in the program, NAO President Ganga Sharma handed out a $500 check to Aasha Deliverance in sympathy — Aasha is the mother of one of the Portland Max incident victims, Taliesin Myrddin Namkai Meche. Taliesin, 23, was killed while protecting two young Muslim girls from a racist man on the train in Portland back in May 26, 2017. In the program, President Sharma also received $400.00 gratitude check from our community member Mina Bhirtakoti. NAO had supported Mina with $200.00 five years back when Mina was suffering from financial hardship and bad health during her first years in the US. Now, she is in a position to help NAO back due to better financial situation. Asha and Mina both addressed to the crowd.

NAO new president Bharat Banskota and all other newly elected officials of the NAO gave a short introduction of themselves to the crowd. Addressing to the crowd, NAO president Banskota stated that NAO will organize more programs to preserve and promote Nepalese culture in Oregon and to support educational programs in Nepal in next two years. NAO new secretary Pramod Poudel introduced all of the new community members in the program. The event was organized at Multnomah Arts Center in Portland, Oregon.

Nepali Association of Oregon (NAO) is initiating a fund raising program to support to any of our community members who has been affected and going through an economic hardship due to COVID-19 pandemic. Right now, we are collecting the data for those affected members living in Oregon State and some parts of Washington. As you all know, it is not clear that when this Pandemic will end and how much it will impact to us. But to be prepared in advance, we are lunching this program and NAO has decided to donate $1000 to start. We need the following help from community members in this difficult time to gain the best outcome of this program:

http://nepaloregon.org/covid-19/Note– NAO will decide the actual amount of money to be distributed or any other non-monetary support items, based on need and available resources.

2. You will get an automated email. Follow the steps in the email.

(Please note that NAO2001@gmail.com is a moderated email group)